Email ThisBlogThis!Share to TwitterShare to FacebookShare to Pinterest
Labels: hours

We've had some inquiries recently about some of the library usage statistics, so here are a few selected bits of data for your perusing pleasure! The infographic is current at the moment, though one of our librarians is retiring at the end of this semester. Also note: the collection bar graph is NOT to scale!


Click through this presentation to see more detailed usage information about our database usage statistics!

Are there any other bits of information you'd like to know about the library? Let us know!
Posted by Kelly Clever at 3:04 PM No comments:

Films set in China are on display over in the O’Hara Room, and in The Reading Room, we’re packing our bags for a fictional trip across the Pacific. We have a significant number of Chinese works in our fiction collection; take the time to acquaint yourself with a new-to-you classic. 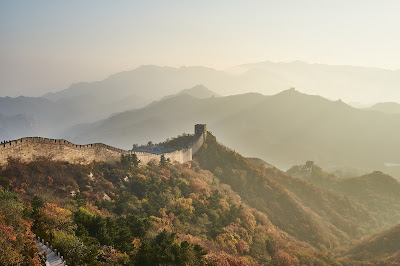 
My Lucky Face by May-Lee Chai
Possessed of a good-fortune face, according to her imposing Auntie Gao, Lin Jun feels anything but fortunate despite her work, husband, and beloved son. A middle-school teacher in China, she befriends Cynthia, an American woman who has arrived to teach English at her school. Influenced by her formative years in the Cultural Revolution, by her new American friend, and by an awakening sense of self, Lin Jun feels awkward, stupid, and incapable yet dreams of leaving behind her unfulfilling marriage and creating a new life for herself.
(Library Journal review)

The Dragon’s Village by Yuan-tsung Chen
Shanghai, 1949: we look through the eyes of Guan Ling-ling, a headstrong, idealistic seventeen-year-old. As her family departs for Hong Kong, Ling-ling boldly chooses to stay, and joins a revolutionary theater group which soon leaves the city to carry out the new reforms in the Chinese countryside. After a scant few weeks' preparation, this city-bred schoolgirl suddenly finds herself in one of China's most remote and impoverished areas, a world so far from her own experience that she can barely understand the lives she has been sent to change. (Publisher’s summary)

Nobel House: A Novel of Contemporary Hong Kong by James Clavell
The tai-pan, Ian Dunross, struggles to rescue Struan's from the precarious financial position left by his predecessor. To do this, he seeks partnership with an American millionaire, while trying to ward off his arch-rival Quillan Gornt, who seeks to destroy Struan's once and for all. Meanwhile, Chinese communists, Taiwanese nationalists, and Soviet spies illegally vie for influence in Hong Kong while the British government seeks to prevent this. And nobody, it seems, can get anything done without enlisting the aid of Hong Kong's criminal underworld. (Publisher’s summary)

A Floating Life: The Adventures of Li Po by Simon Elegant
History and legend combine brilliantly in Simon Elegant's bawdy "autobiographical" account of China's famed rabble-rousing versemaker Li Po. On a lavishly outfitted river barge in ancient China, a studious young vintner's son takes down the life story of the extraordinary Tang Dynasty poet-in-exile, none other than the "Banished Immortal" himself, the great Li Po.Li Po relives his outlandish adventures, from riding on the back of an enormous eagle to working for a brutal butcher as a Pigboy-in-training, and struggling to make his mark at the court of China's most glorious emperor. (Publisher’s summary)

Soul Mountain by Xingjian Gao
In 1983, Chinese playwright, critic, fiction writer, and painter Gao Xingjian was diagnosed with lung cancer and faced imminent death.But six weeks later, a second examination revealed there was no cancer--he had won "a second reprieve from death." Faced with a repressive cultural environment and the threat of a spell in a prison farm, Gao fled Beijing and began a journey of 15,000 kilometers into the remote mountains and ancient forests of Sichuan in southwest China. The result of this epic voyage of discovery is Soul Mountain (Publisher’s summary)

The Binding Chair, or, A Visit from the Foot Emancipation Society by Kathryn Harrison
In poised and elegant prose, Kathryn Harrison weaves a stunning story of women, travel, and flight; of love, revenge, and fear; of the search for home and the need to escape it. Set in alluring Shanghai at the turn of the century, The Binding Chair intertwines the destinies of a Chinese woman determined to forget her past and a Western girl focused on the promises of the future. (Publisher’s summary)

When We Were Orphans by Kazuo Ishiguro
England, 1930s. Christopher Banks has become the country's most celebrated detective, his cases the talk of London society. Yet one unsolved crime always haunted him: the mysterious disappearance of his parents, in Old Shanghai, when he was a small boy. Now, as the world lurches towards total war, Banks realizes that the time has come for him to return to the city of his childhood and at last solve the mystery - that only by doing so will civilization be saved from the approaching catastrophe. (Publisher’s summary)

Waiting by Ha Jin
This is the story of Lin Kong, a man living in two worlds, struggling with the conflicting claims of two utterly different women as he moves through the political minefields of a society designed to regulate his every move and stifle the promptings of his innermost heart. (Publisher’s summary) 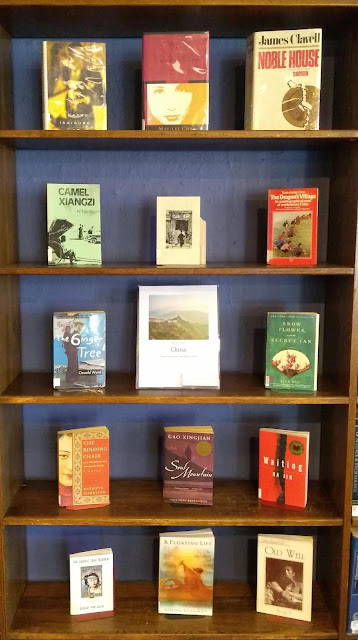 Camel Xiangzi by Lao She
Fictionalized account of the author's experiences in his early youth with the poverty of his family and neighbors. The story takes place in China before the Communist take-over and Chairman Mao's rise to power. The author came to see communism and Mao as the solution to the poverty of the masses. (Publisher’s summary)

The Family by Jin Ba
The first half of the 20th century was a period of great turmoil in China, with thousands of years of established civilization being uprooted by a radical socialist revolution. Family, one of the most popular Chinese novels of that time, vividly reflects that turmoil and serves as a basis for understanding what followed… Drawn largely from Ba Jin's own experience, Family is the story of the Kao family compound, consisting of four generations plus servants; it's essentially a picture of the conflict between old China and the new tide rising to destroy it, as manifested in the daily lives of the Kao family. (Publisher’s summary)

Snow Flower and the Secret Fan by Lisa See
In nineteenth-century China, when wives and daughters were foot-bound and lived in almost total seclusion, the women in one remote Hunan county developed their own secret code for communication: nu shu ("women's writing"). Some girls were paired with laotongs, "old sames," in emotional matches that lasted throughout their lives. They painted letters on fans, embroidered messages on handkerchiefs, and composed stories, thereby reaching out of their isolation to share their hopes, dreams, and accomplishments.

With the arrival of a silk fan on which Snow Flower has composed for Lily a poem of introduction in nu shu, their friendship is sealed and they become "old sames" at the tender age of seven. As the years pass, through famine and rebellion, they reflect upon their arranged marriages, loneliness, and the joys and tragedies of motherhood. The two find solace, developing a bond that keeps their spirits alive. But when a misunderstanding arises, their lifelong friendship suddenly threatens to tear apart. (Publisher’s summary)

The Ginger Tree by Oswald Wynd
In 1903, a young Scotswoman named Mary Mackenzie sets sail for China to marry her betrothed, a military attache in Peking. But soon after her arrival, Mary falls into an adulterous affair with a young Japanese nobleman, scandalizing the British community. Casting her out of the European community, her compatriots tear her away from her small daughter. A woman abandoned and alone, Mary learns to survive over forty tumultuous years in Asia, including two world wars and the cataclysmic Tokyo earthquake of 1923. (Publisher’s summary)

Old Well by Yi Zheng
This novel from contemporary China tells the story of life in Old Well, a peasant village struggling against a perennial lack of water. Sun Wangquan is continuing the family tradition of digging new wells, a task that has claimed the lives of several of his ancestors, but he is the first to apply modern scientific methods. Much of the narrative is devoted to the love triangle of Sun Wangquan, his traditional wife Duan Xifeng, and the modern woman Zhao Qiaoying who has captured his heart. (Library Journal review)

Posted by Kelly Clever at 3:30 PM No comments:

April DVD Spotlight: The Cinema of China and Hong Kong

For this month's DVD spotlight, we're heading across the globe to celebrate the cinematic output of China and Hong Kong.  While both mainland China and the former British colony of Hong Kong had distinctive film industries for much of the 20th century, it was only in recent decades that films from these industries gained international prominence.  The energy and style of directors like John Woo, Tsui Hark, and Wong Kar-Wai led to a boom in popularity among Hong Kong films in the 1980s and 1990s, while at the same time China's "Fifth Generation" of directors, such as Zhang Yimou and Chen Kaige, drew global acclaim for their work.  We've got a wide variety of films from this period and later, spanning a range of genres. 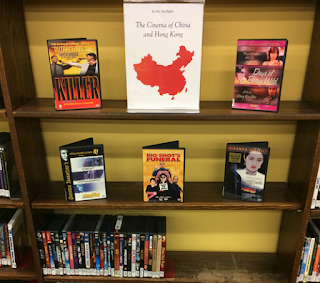 Chungking Express (1994)
A pair of intertwined love stories unfold against the backdrop of a bustling Hong Kong shopping center in this celebrated gem from Wong Kar-Wai.

Farewell My Concubine (1993)
This exquisite historical drama follows two orphans who spend their lives as performers in the Peking Opera.

Hard Boiled (1992)
A die-hard Hong Kong cop teams up with an undercover agent to bring down a mob of smugglers in John Woo's influential shoot-'em-up classic, arguably the best action film ever made.

In the Mood for Love (2000)
This gorgeous, swooningly romantic period drama, directed by the great Wong Kar-Wai, chronicles the relationship between two neighbors who realize their spouses are having an extramarital affair.

Infernal Affairs (2002)
In this stylish thriller that inspired the Oscar-winning gangster film The Departed, a cat-and-mouse game ensues when an undercover cop infiltrates the mob, only to discover that the mob may have a mole within the police.

Shower (1999)
In this winning comedy, a successful businessman returns home and develops a new appreciation for the traditional bath house run by his family.

To Live (1994)
This sweeping historical epic, from acclaimed director Zhang Yimou, depicts a family's struggle to survive across four decades of tumult and social change in 20th-century China.

Stop by the library and check one out today!
Posted by Adam Pellman at 12:46 PM No comments:

Back to the Library